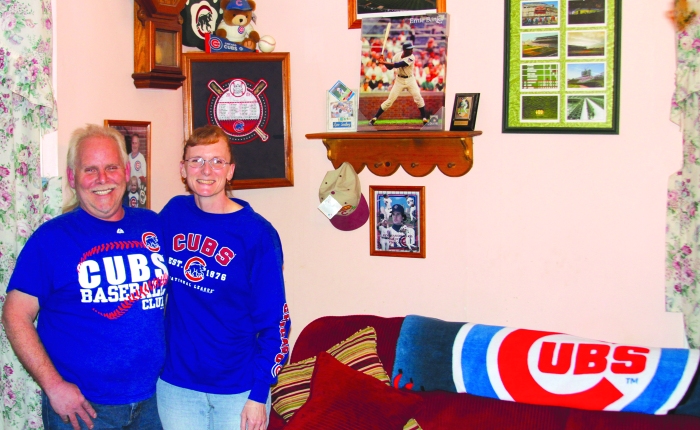 The four unmistakable signs of spring time in Cynthiana, Kentucky: The Cynthiana Democrat’s Home and Garden Show, the opening of the Farmer’s Market at Flat Run Veterans’ Park, dogwoods and tulips in full bloom, and the annual unfurling of the Chicago Cubs flags in the front yard of Jamie and Karan Russell’s home.

The Kentucky Wildcats can boast all they want about the national appeal of the Big Blue Nation in NCAA basketball. In the world of major league baseball, at least as far as the Russells are concerned, there is only the Chicago Cubs. And they are as mad for the Cubs’ season-opening game as Wildcats’ fans are for Midnight Madness.
Any other time of the year, the Russells’ home is just as quietly dignified as any other family dwelling on Church Street. But on opening day, the Cub’s signature blue and red colors blossom all around the yard, along with images of the baseball team’s famous logo.
Pinstriped cards featuring the numbers and names of past Cubs’ hall of famers line the sidewalk leading to their front door.
In honor of Wrigley Field’s 100th anniversary celebration this year, the Russells had an image of the ballpark’s famous sign custom-painted to the rear window of their car.
Now, if they were just Chicago area residents, the level of the Russell’s Cubs fandom would barely register. They’d still be considered diehards, but they’d hardly be alone. Anyone who has visited Wrigley Field for a Cubs’ home game knows the extent to which the fans will express themselves.
But when fans live six hours south of the corner of W. Addison and N. Clark Streets, the Russell’s home is a Wrigleyville oasis that adds a unique note to their block in downtown Cynthiana.
The decorations don’t fail to make an impression on passers-by, especially those who are unfamiliar with the passion of the Cubs’ fanbase.
“Jamie had some friends who didn’t know that we were such huge Cubs fans. They were coming to our house and the woman saw our decorations and said, ‘now that’s tacky.’ I quickly owned up to them and said I aspire for the tastefully tacky,” Karan said.
Karan can’t help it. She and her husband love their Cubs.
“We have Braves’ fans in the neighborhood who threaten to sneak little tomahawks onto our lawn. Our friends who are Reds fans tease us every year we fall short in the playoffs. But someday…” Karan said with a prayerful gesture to the baseball gods.
Karan introduced her husband to the pleasures of wearing the red and blue.
She grew up in Rockford, Ill., which is still about two hours away from Chicago.  Her family got cable television in 1980, that ancient time when there weren’t 500 stations on the box.
When it came to baseball,  there was the so-called “America’s Team” on that Atlanta station, but Karan and her dad preferred to watch the Cubs on WGN.
That was the beginning of the one relationship that has lasted longer than her marriage. In fact, Karan said, she and Jamie planned their honeymoon vacation around Cubs games.
Just as some Kentucky boys realize that marrying a young girl meant marrying into her family, Jamie knew soon after he’d met Karan that the Cubs were going to be a part of his wedding vows. 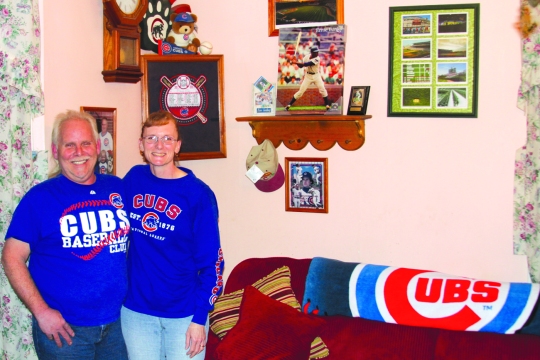 He’s never regretted accepting the Cubs into his life, although early on he still had some learning to do about being a fan.
His first lesson came before they were even married.
“He [Jamie] suggested we just take off for Chicago one morning for a game. This was before we had kids, so we could do things like that. Or at least he thought so. I kept saying it wasn’t a good idea. But next thing I know, we were arriving at Wrigley Field at 3:15 in the afternoon,” she said.
Unfortunately, the game was sold out and scalper tickets were just out of their range.
They managed to make the best of it, Karan said, but from then on, they’ve made sure to get tickets before taking off to a game.
“I wasn’t all that into sports when we first met. But I keep up with them in my own way now,” Jamie said.
For Jamie, that means not only traveling to Cubs games, but also taking in games with the minor league affiliates like the Tennessee Smokies and the Daytona Cubs.
For the family, vacation planning often centers around Cubs games, even if their trips are to destinations down south to Georgia or Florida.
Their kids, Westin and Miranda, have shared the Cubs experience with their parents, but have not yet acquired the same level of appreciation for the team.
“We once asked Westin where he wanted to take a family vacation and he said anywhere where there wasn’t a ballpark nearby,” Jamie said.
The Russells acknowledge, grudgingly, that there exists a rival fanbase for some New York team. They have even heard rumor of another professional baseball team out of Chicago’s southside.
But the Cubs rule their household. And just as the spring season brings about all kinds of re-birth, so too do the Russells’ hopes, along with countless other fans across this country, that this year will be the year the Cubs make the Series.
Maybe they’ll even win it!
After all, it’s gotta happen sometime.

Church street couple are Cubs fans to the core | CynthianaDemocrat.com.