****** Note to Readers of this story: Since this story’s publication in August 2014, I have endeavored to verify the developments that Michael Todd Barrick, aka Kentuckyana Jones, outlined in our interview. I make frequent trips to Cave City, Kentucky and often journey the highway which runs right by the former Cave City Wax Museum. To the best of my knowledge, nothing has been done to rehab the property, though I have received unconfirmed reports that its contents, whatever they may have been, were removed at some point. Who knows when that could have happened. Furthermore, there is no indication that Mr. Barrick has followed through on his grand plans for Patriot trees. So, visitor, take what you read in these next paragraphs with only a few grains of salt. There seemed at the time, to me at least, a good faith effort on Kentuckyana’s part to realize a dream of reality TV stardom on E, A&E or some other ailing television channel desperate for original material. But the dream has, as yet, not materialized. So enjoy the following not so much as factual information, though the events of that Thursday afternoon did happen, but rather as fictional entertainment featuring an also-ran in the sweepstakes for a place in contemporary Kentucky folklore.****

At Battlegrove Cemetery Thursday morning, 2014, people may have witnessed an unusual sight — a camera crew at the military memorial with their lenses fixed on Bob Owen and a smiling, bearded stranger gathering a soil sample from beneath a veteran’s plaque. 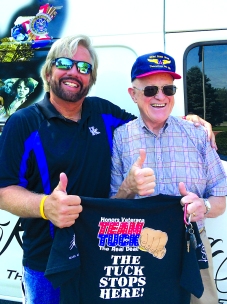 Or, on Thursday afternoon, people might have seen the same camera crew entering the Maysville Community and Technical College, Licking Valley Campus’ Art Gallery following the bearded stranger with one arm draped around the shoulder of local artist Herby Moore. 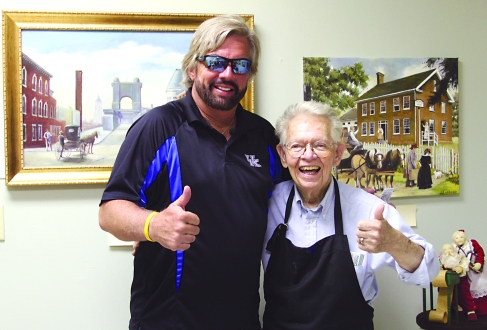 People didn’t have to look far to find out the name of the stranger. It was written in florid script on three large vans out in the parking lot.

Jones, a business entrepreneur and trader in antiques, treasures, and rare collectibles, was a featured guest star on an episode of “Barry’d Treasure,” a reality show on the A&E channel starring celebrity antique dealer Barry Weiss.

The episode, “Kentuckyana Jones and the Emperor’s Vessel” aired in March 2014.

But it wasn’t for another person’s television show that brought Jones to Cynthiana last Thursday.

The Bowling Green native was in town shooting footage for a potential television series of his own.

Jones said that a part of the show  would chronicle his adventures searching for valuable artifacts. The objects that he sought in Cynthiana, however, were not hidden or even remotely hard to find. The sample of Herby Moore’s paintings, which Jones wanted, were all in plain sight in Moore’s space at the LVC Art Gallery.

Unlike other places he plans to visit, Jones did not choose Cynthiana at random. He has a very special connection to Moore and, therefore, to this community.

Jones has been friends with Moore since the sale of the wax museum. Growing up in Bowling Green, Jones was very familiar with the tourist attraction in Cave City. But he never thought anything else about it until one day when he saw that the building was for sale. It was a spontaneous decision to make an offer for it, Jones said.

“It may not be the way most people do business, but I like to fly by the seat of my pants sometimes. I like taking risks. America was built on the shoulders of entrepreneurs who’ve done the same thing,” Jones said.

Moore’s paintings will feature prominently in Jones’ long-term plans to transform the wax museum into a new area tourist attraction. He intends to create a museum dedicated to America’s veterans, a subject that Jones is as passionate about as he is negotiating a good price for an artifact.

Honoring veterans will also be a critical part of the show that Jones and his film crew are currently shooting.

“We’re dedicating a large chunk of our show’s time talking with the families of veterans who have already gone on. At the end of every show, we will have a ceremony where we go to the veteran’s gravesite with a family member and gather a soil sample,” Jones said.

Jones paid a visit to local Cynthiana resident Bob Owen on Thursday morning to talk about Brig. Gen. Jack Henry Owen, Bob’s uncle, who passed away about a year and a half ago.

During his military career, Gen. Owen flew a B-17 bomber in the European theater of World War II and survived two years as a prisoner of war, Bob Owen said.

There was no particular reason that Gen. Owen was selected over any other veteran, Jones said. “Herby is a friend of Bob’s and suggested he be a good subject.”

Jones has been to seven other states so far and done the same thing.

The soil sample taken from Battlegrove Cemetery will be stored in a vault for the time being. It is Jones’ ambition to get soil samples from all 50 states.

When he has accomplished that goal, he plans to donate those samples to the Patriot Soil Project, a national effort to honor veterans which Jones ardently supports.

The Patriot Soil Project is accepting donations of soil samples from the graves of veterans across the nation.

When completed, the project’s organizers will combine the soil from the gravesites of fallen veterans from all 50 states and used to plant a living memorial, a “Patriot Tree,” on the White House lawn, Jones said.

Other Patriot Trees will be planted on the grounds of the governors’ mansions throughout the nation.

For those interested in donating funds or soil samples to this effort, visit the website Patriotsoil.org for more information.

If all goes well, Jones has one more idea in mind:

He wants to plant a “Patriot Tree” on the grounds of the veterans’ museum in Cave City when renovation work is complete.

In the meantime, though, Jones will be traveling and meeting with folks, saving the memories on film and in the charateristic “thumbs-up” pictures he is taking with his guests and friends.

5 thoughts on “Kentuckyana Jones and the Cave City Wax Museum”